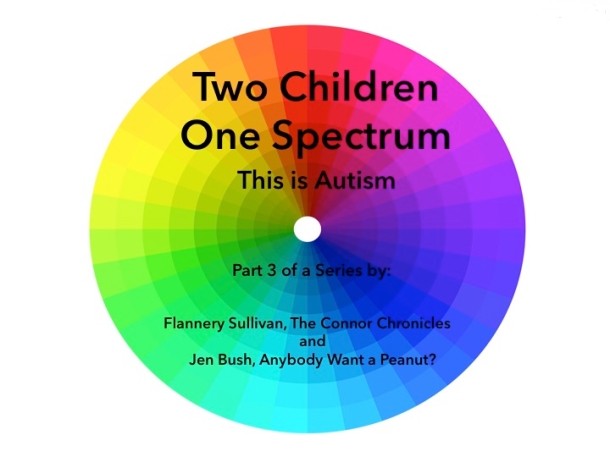 Welcome to part 3 of the series where we discuss the characteristics of two different children on the autism spectrum. If you’re just joining us, you can get caught up by reading part 1 here, and part 2 here.

Today Jen, from Anybody Want a Peanut, and I will be talking about feeding issues (and successes!) our boys have faced.

Food has always been an issue for Connor. As a baby he had reflux and needed special formula to prevent spitting up. When it was time to transition to solid food, it was a slow and painful process. He preferred soft foods like cheese, bread, yogurt, and mashed banana. We gradually added mashed potatoes and macaroni and cheese to the repertoire, and that’s where things stayed for about two years. Very, very slowly we added new foods to his diet. Cereal bars were a staple, and I’m certain I had a constant supply of goldfish crackers and those cereal bars in my purse for about 4 years. We eventually worked our way up to pizza, but he would not eat it unless it was “triangle” pizza, meaning he wouldn’t eat a square-shaped pizza or French bread pizza.

We still have a limited menu, although I know it’s much more diverse than it is for other kids on the spectrum.  He refused to eat meat until he was almost 5, but he has since added that, and much more, to his menu.He’ll eat pizza of any shape now, hamburgers, turkey dogs, spaghetti (under protest), sloppy Joe’s, Tyson chicken nuggets, and fish sticks, tater tots, and fries. He doesn’t care for vegetables, although I can generally get him to eat one or two cooked carrots. He will eat fruit, but the peaches and pears have to be canned, not fresh. Fruits, vegetables, nuggets, fish sticks and tots are all dredged through ketchup, so I keep a steady supply on hand. He’ll also eat turkey, ham, or peanut butter sandwiches. He won’t eat turkey or ham as a dinner item, only lunch meat. He will not eat any corn-based food (corn, corn chips, corn tortillas, etc.). He’ll also eat Cheerios and Oatmeal Squares, as well as scrambled egg in small amounts.

And bread…oh, the bread! He is a carb-craver and seeks out toast, bagels, and English muffins. There have been occasions where he’s up before us on the weekend and has helped himself to 4-5 mini bagels. We have to hide them now, since he hasn’t learned to self-monitor.

We’re at a point where I feel comfortable enough not to worry whether he’ll add any more foods to his diet. He can live a long and healthy life with the variety that he currently eats, although I worry that he’s missing out on the joy of Mexican food!

Food is the one area we have easy! Moe is my little foodie. Salad is a favorite, and he will eat anything from pizza to a bean burrito to a steak with pureed cauliflower. Like many kids, he loves McDonalds, but he also likes spicy foods. He’d be happy with chips and salsa all day. (Wouldn’t we all?).

The flip side of this is that Moe can be a little food obsessed. He will lead me into the kitchen 100 times a day. He’d like to snack all day long if he could. It is also something Moe knows how to do and he feels successful when he asks for food and he gets it. We want to reward that communication. But we can’t always say yes of course, but if we say no, he gets very angry and we have to manage that as well. It’s a constant balancing act. Because he eats so well, he is at a very healthy weight but the constant asking for food, leading to the kitchen or handing me his plate or cup for more can really try my patience.

He is a messy eater, though, and using a fork or spoon can be tough. He can also be distrustful of new foods. He’ll often look to see what I’m eating, then try mine, before trusting it on his plate. One time, Moe started crying in fear because I tried to hand him a doughnut. He’d only eat it once we broke it into small pieces.

Are you surprised? I am. I must confess that, until I’d read what Jen wrote about Moe’s food success, I just assumed that he probably had some challenges. Almost every other autism family I know has had issues with food, some of them pretty severe. But that’s the point of this series, to learn to put preconceived notions aside and take a deeper look to see the individual underneath the autism label.

The next post in the series will run on Tuesday, December 9th, and will cover the topic of sensory challenges. As always, we encourage you to write about your own child’s unique characteristics and leave a comment with a link to your site.

Posted in Autism, series, Spectrum/Parenting blogs and tagged Anybody Want a Peanut, autism and feeding issues, Two Children One Spectrum. Bookmark the permalink.

Kid, husband, dogs, my mother, full-time job, maximum stress, minimal relaxation...sooner or later I had to vent. AND we moved from California to Texas. I could start a whole other blog about that.
View all posts by Flannery »
← Two Children, One Spectrum: Communication
The Twelve Days of Autistic Christmas →